Do My Feelings Matter?

3rd April 2018
me
0 comments
by Jemma
Diary of A Successful Black Woman > me > Do My Feelings Matter? 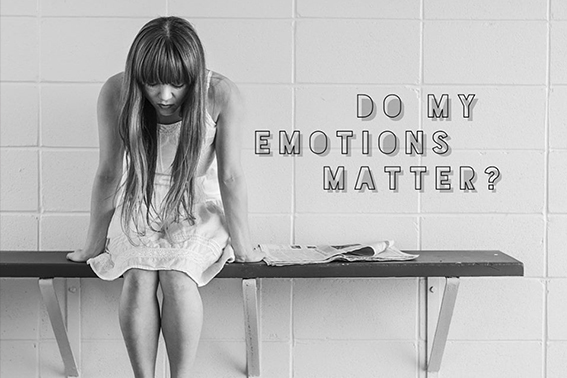 Do my feelings matter?

Some would argue yes, and in many cases they do, but what about when they are managed by damaged emotions, do they still matter?

Have you ever felt so discouraged, so fed up, so angry and frustrated all at the same time? The hopelessness of discouragement met with the frustration of trying and a determination not to give up? For me, some days really are like that, being stuck between a rock and a hard place.

When faced with such emotions, do my feelings matter?

Blow after blow, each designed to take you out, wear you down, strip you of what little motivation you used to get up and attack the obstacle that has just set you back yet another 100 steps. The kind of disappointment that leaves you so hopeless you want to give up but you can’t because of the anger and even more frustration that comes with giving up. You want to give in due to discouragement but you can’t due to the heavier bought of discouragement you will face from giving in and giving up.

When faced with such emotions, do my feelings matter?

Sounds like an impossible situation and one I was recently facing. I had used up all my motivated, “you ain’t gonna keep me down” chat, all my “I can do all things through Christ who strengthens me” pep talk. I had even been comforted and encouraged by dear loved ones. Heck, I had just returned from hosting an amazing youth retreat which impacted the lives of so many young people and yet here I was feeling discouraged and outraged at the emotional heaviness that came with such feelings.

Stuff was happening, great things were taking place but the road I was on seemed blurred and things that were of grave importance to me were crashing down around my feet. Until a couple of weeks, I had been solely surviving on prayer and strained determination. My quiet time with God had been just that, quiet with neither of us saying much. I tried to share how I feeling with others but found it stifling as the minute I mention the word discouraged the entire world seems to go into overdrive telling me I can’t go back to the way I was like that is an option I would ever consider. People were hearing, but they were not listening.

As a human being, I should be able to air how I feel without being made to feel like I am what I feel… Saying I feel like a failure is not the same as saying I am a failure. When I say what I say but still get up every day busting my butt, I am simply saying “Life is tough, this is how it’s making me feel, but I got to keep going and your help would be appreciated,”

Having come to a place where I am now learning to manage my emotions, I would have to say when faced with such emotions it is winning and not my feelings that matter the most. My feelings have a way of weighing me down, holding me down, fighting for my attention. While my will tells me you have to keep on going, keep on fighting, keep on breathing so you can keep on living. But what about the person whose will and mindset are not strong enough to fight? Do we label them weak? Do we turn our back on them due to lack of understanding?

Yes, I was once that person.

For me winning is something I do daily. If my feeling had full control I would fail before I even started. Winning is getting up and pushing on, on days when that is the last thing I feel like doing. Winning is experiencing the disappointment, feeling the discouragement, but still putting one foot in front the other and making progress. I wish I could tell you that it’s no big deal, but I can’t because for me it is a very big deal.

Winning is hard work, it can be draining and tiring, it often takes up all my energy and motivation to not to give in, then takes all my willpower to push on and all because at this point my feelings don’t matter in the way they want to.

If I told you that when I started writing this blog a month ago, I felt like a failure, I had no idea what I was doing and was praying and hoping that next day would be met with more enthusiasm than the present, you would probably think I was being negative, but the truth is there is nothing negative about it because its not just about how I feel, but more about what I do.

Do my feelings matter? Yes, they do, because without them I would not be conquering the fight of managing my depression, winning and gaining the higher ground. Feelings work for us, they act as warning signs. They tell us when something is wrong and when something is right when something bad and when something is good. Our feelings become dangerous when there is an imbalance. When we feel too low for long periods of time, things become distorted and at that point, depression can start to set in. Likewise, if we are happy and high all the time, we run the risk of being out of touch with our feelings. Damaged and unhealed emotions will always tip us towards imbalance because they offer a false sense of the truth.

In light of this month being Mental Health Awareness month, and the one to many stories I have been privy to lately of  people I know who have been affected by the act of suicide and sectioning under the mental health act I feel very strongly about bringing a greater awareness to people, in particular, Christians and Christians leaders about the struggle of mental health. Do not be part of the problem, be part of the solution.

For more help in understanding mental health see the following: